I've been working on this commission most of this year - well, "pondering" quite a lot of that time rather than actually sculpting.  One problem is, the horse has only one leg on the ground, which isn't enough support for the sculpture.  The other big problem was, how do I translate that massive clump of hair (his mane) that's lying on his side into a flowing form that will look good and be reasonable to clean up, rather than looking like a tangled mess?  Thankfully, I've solved or figured out how to solve those problems. 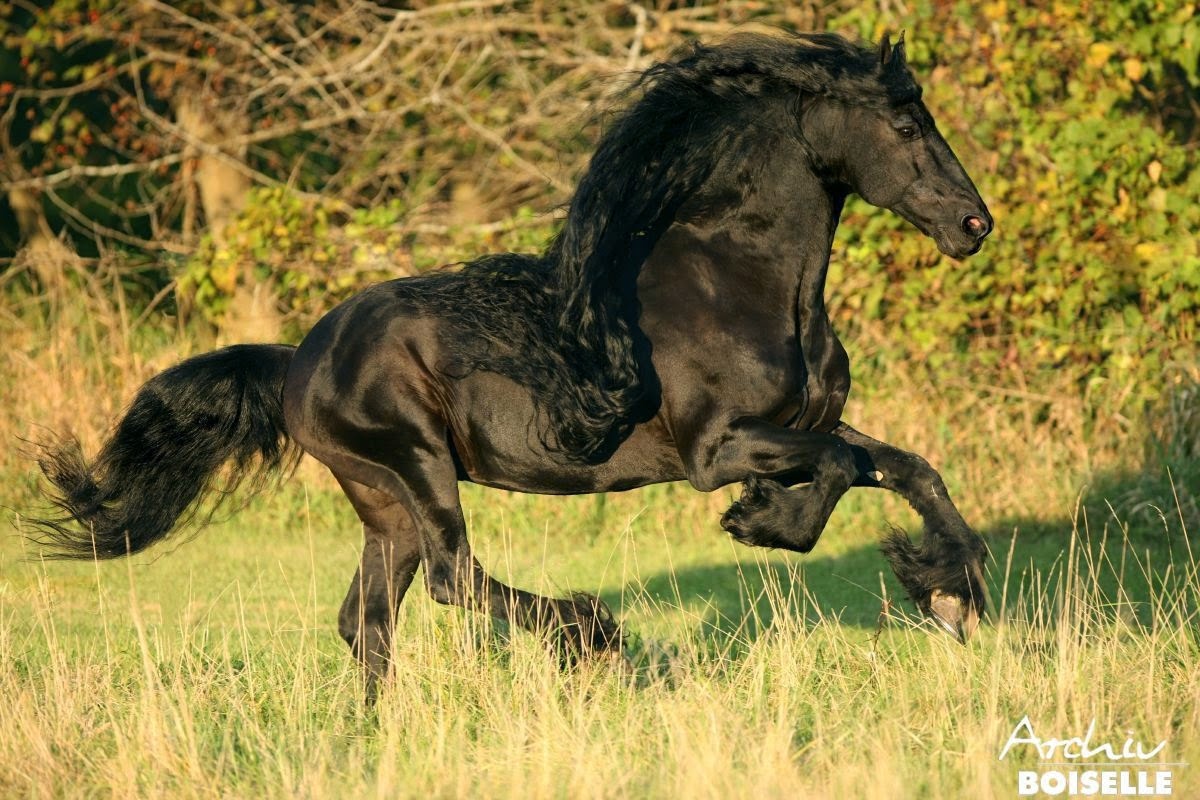 Ms. Boiselle kindly gave permission for me to sculpt this pose, for which my customer and I are very grateful.

Looking at the picture, you can see my problem with only one leg being down.  There's a tremendous amount of weight ahead of that leg and not that much behind, so it won't "balance" on that leg.  There needs to be another leg attached to the ground for support, so that other hind leg will be shown as moving through a tall clump of grass.  I'm not at that point in sculpting yet, but I'll share it when I get there. 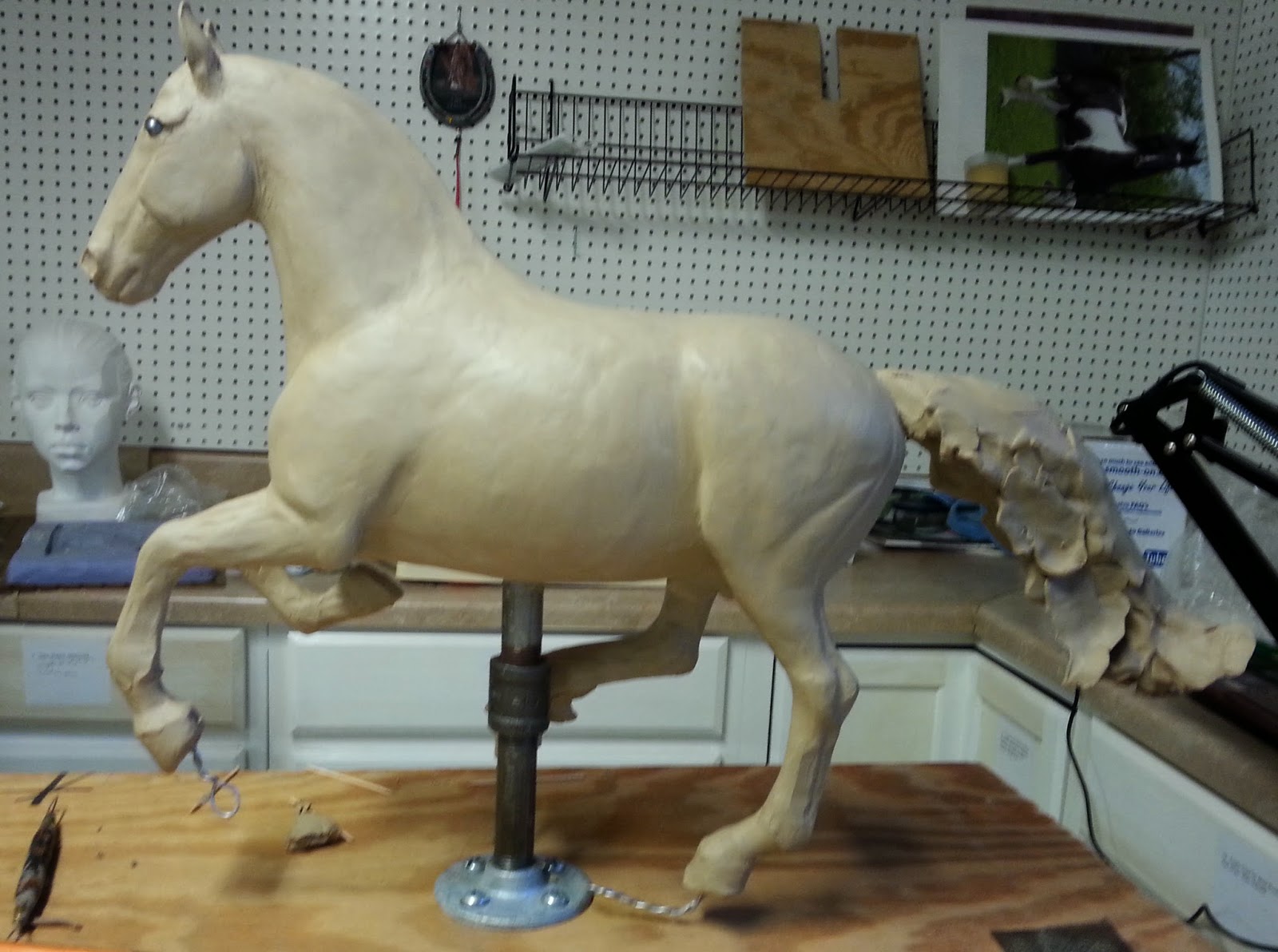 First, I had to build the horse and get him fairly finished before adding the hair.  I've just started laying on the clay for his tail here and having started the feathers yet.  His eyes are ball earrings, in case you wondered.  It's easier for me to sculpt expressive eyelids if I have a hard eyeball to work with, rather than doing the eye in clay or wax.  And this way, the eye is genuinely round, not lumpy like a wax ball would be (at least in my hands - I don't work with wax as well as I'd like). 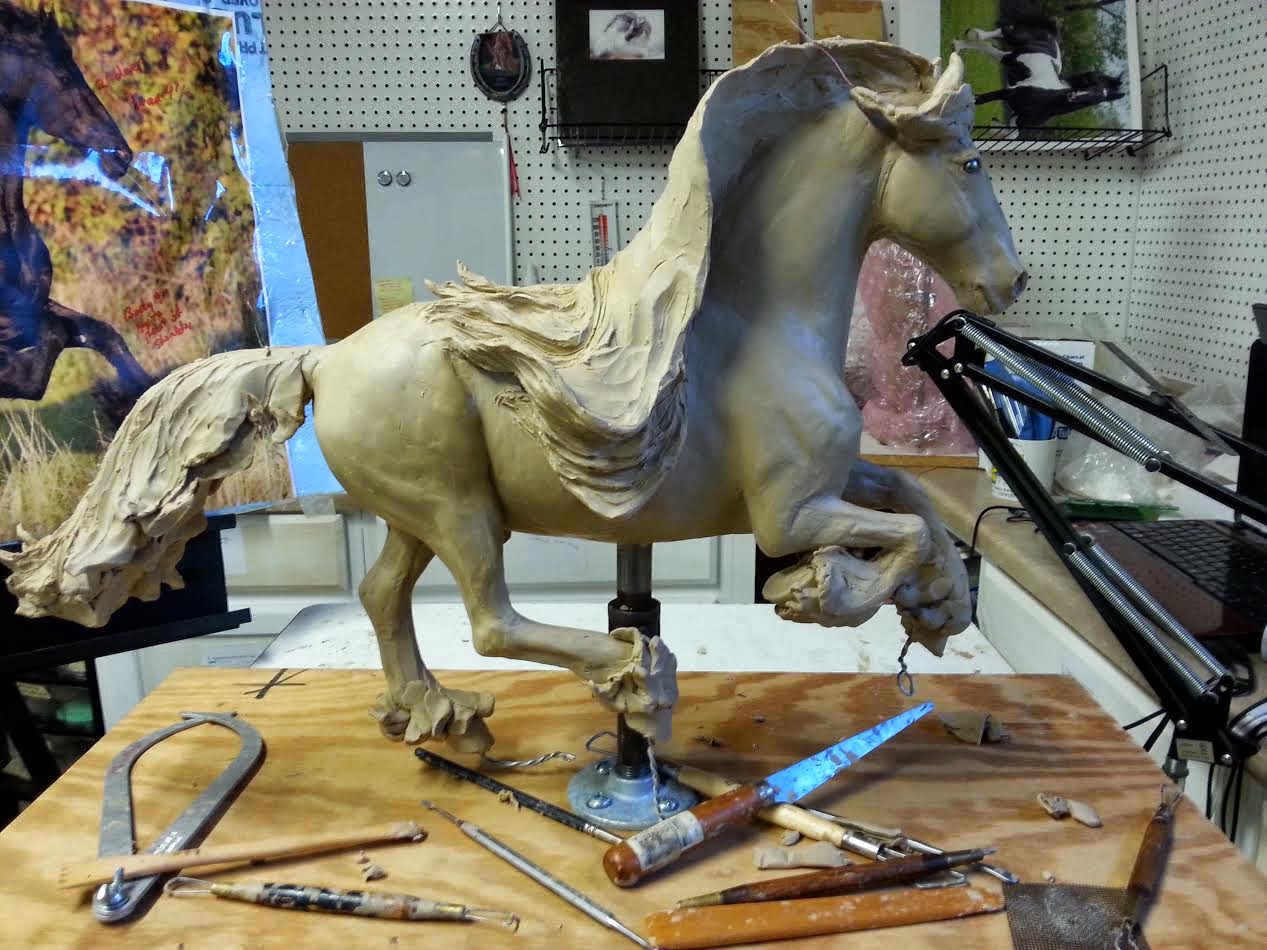 Early work on the mane and feathers.  Each leg is at a different moment in flight, so the feathers "fly" differently on each leg.  This horse has massive feathers as well as a massive mane and tail, so there will be a LOT more clay on him before he's "right" - and yes, that's a LOT of hair to sculpt!

At various points during my work, I get the piece off the base and hang it upside down so I can work on the underneath parts without turning myself into a pretzel (as I did for years before fellow sculptor Cathy Choyce told me about this method).  This is by far the easier part of this kind of work, since I can work with my arms at a normal level (as if I were typing). With most pieces, I work with the horse's back supported by my legs, but with that mane in the way, Anton has to hang free. Him hanging free means I have to brace him with one hand while sculpting with the other, which can be difficult at times, but still, it's a lot easier on my shoulders and back than leaving it on my usual sculpting stand and trying to twist my body to see underneath him!

For those who haven't seen this setup before, the chain slides through a hole somebody put in the joist overhead such as pipes would go through. (In my previous studio, I had an eye-bolt attached to a joist in the ceiling.)  I have carabiners and S-hooks holding it where I want it. I keep a spare plumbing T on the chain so I can unscrew my armature from the working surface and screw it to the T to hang the piece upside down. I sit in the black chair with the necessary tools and some clay on the wooden stool beside me at a comfortable height.

You can see my normal sculpting stand to the left of that photo and the drafting stool I normally sit on. The stand is adjustable by turning a crank which raises and lowers the top. This stand was worth the cost, as often as I change the height of my stand. My old stand was one of those where you insert a pin in the support pipe at various heights, but you have to LIFT the top to the place where you want it. I still use the old one at times. I don't throw much away . . .

This pic shows what I need to work on (as well as how much work I've done on the feathers). The hooves need to have the details (wall, sole, frog, heel bulbs) added, and there are holes or voids in the clay here and there (look at the tail and feathers for examples) that need to either be blended or filled so they won't catch the mold material and possibly tear the mold. I also need to smooth out his belly and other parts. By hanging him like this, I can make sure everything is blended, filled in where necessary and sculpted properly. After I hung him up I noticed the bone in the forelegs didn't show correctly, so I fixed that as well as a bunch of other stuff.  Changing your point of view is always helpful in perfecting an artwork.  I also use a big wall mirror to see it with fresh eyes.

All that hair means there are lots of undercuts. Undercuts are fine in bronze to some extent, but again, I have to fix anything that might trap the mold - voids or undercuts that get larger "inside" or "under," for instance. Silicon molds are very forgiving, but there's no point in tempting fate by leaving such things that can be repaired. Sculpture is about light and shadow, so there will be some places that LOOK like undercuts, but they will be angled inside the cut to allow the mold to pull free smoothly.

Once I get the underneath parts fixed, I'll put him back on his working surface and glue the pipes in place - he won't be coming off there again until he's at the foundry. Then I'll add the grass under his feet and build it up to support that flying back leg, detail his tail, finish detailing his mane and forelock and sign him!! Then he'll be DONE and can go to be cast! YAY!

Once I get him upright again, I'll post some more pictures.  I hope this article was educational and entertaining!

Links to my other sites

Links to my blog buddies